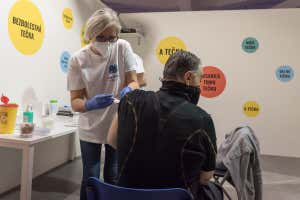 A man receives a third injection of a covid-19 vaccine in Prague, Czech Republic

When people in the Czech Republic learned that a high number of doctors intended to take a covid-19 vaccine, they were slightly more likely to get the vaccine themselves

Offering accurate information about the way doctors view covid-19 vaccines may reduce vaccine hesitancy in the general population, a study in the Czech Republic suggests. More people in the country opted to receive a coronavirus vaccine after they were told early in the pandemic that most doctors intended to get vaccinated.

Vaccine hesitancy has been a major issue during the pandemic across the globe. In the Czech Republic, about 64 per cent of people have had two doses of a coronavirus vaccine, which is higher than the global average of 60 per cent. The Czech Republic also has one of the highest death tolls per capita for covid-19 in the world.

Vojtěch Bartoš at the University of Milan in Italy and his colleagues surveyed 2501 people in the Czech Republic in March 2021 – two months after covid-19 jabs had begun to be rolled out in the country. The participants were nationally representative of the country.

Bartoš and his colleagues believed that the media discourse surrounding the vaccine at the time may have given a skewed idea of what doctors believed about the jabs. “Journalists were giving equal time to those who trust vaccines and those who were sceptical,” he says. “It was a false balance.”

The team chose to study the Czech Republic because its population is known to have a similar level of faith in its doctors as the global average, with 73 per cent saying that the country’s doctors can be trusted.

The researchers found that about 60 per cent of the participants believed that Czech doctors intended to get vaccinated, while 57 per cent believed that doctors would recommend the jab to patients.

Half the participants were then told the results of a survey the team had performed on 9650 of the Czech Republic’s doctors, which found that 90 per cent of the doctors intended to get jabbed and 95 per cent planned to recommend the vaccine to their patients. The other half weren’t given this information.

“We saw a huge mismatch between what the doctors actually told us and what the population thought,” says Bartoš. The researchers hoped that by correcting this flawed understanding they could encourage participants in their study to overcome any vaccine hesitancy and get vaccinated.

The researchers followed the participants for nine months. When the vaccine rollout ramped up in July 2021, those who had been told the doctors’ true beliefs on vaccines were 4 per cent more likely to get vaccinated than those who hadn’t been.

This figure remained stable over the remaining follow-up months. When the participants were asked about their intention to get a booster jab, a similar 4 per cent difference was observed between the two groups.

Bartoš says the findings point to an easy and cheap way to get more people vaccinated.

He is unsure whether the results would be repeated in other countries. “It’s hard to say,” he says. “My best guess is that this could work very similarly in those countries where trust in doctors is similar and where there is this prevalence of false balance reporting.”

It is an important finding, says Heidi Larson at the London School of Hygiene and Tropical Medicine. It is particularly striking that the effect of giving people the true statistics about the views of the Czech Republic’s doctors persisted in the long term, she says.